Bella Union has released the first single for their new album See You Tomorrow. Already released as a digital single in the US, “This Boat” is now making its rounds as a promotional CD-R similar to the release of “Look Out From Your Window” from their previous album. Since these are promotional CDs only, you will likely find them on E-bay. 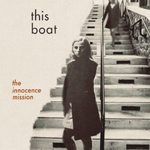