Here’s a quote I found on an Innocence Mission Facebook group posting from May 4, 2009:

“I met Karen Peris on South Street in Philadelphia aboput ten years ago. The band was about to play a show, and she was doing some shopping. She was kind, very shy, and said that she was not used to fans approaching her on the street. She told me that the cover of Umbrella was an actual journal of hers, with the picture super imposed over it.” – Gerard Schuler Jr 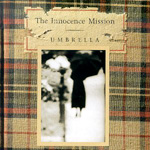