Just squeaking in before the new year and in advance of next year’s new album, the Innocence Mission are issuing their first self-released recording since Christ Is My Hope in 2000 and this will be their first EP release since The Lakes of Canada in 1999.

Street Map will be a limited pressing CD containing 8 songs: a few from their forthcoming album, another few new “b-sides” and the demo track “A Thousand Miles” which turned up on the “Evensong” compilation in 2000.

Sound bytes for “From A Homeland” and “Pioneering” can be heard at their myspace page. The album is available for pre-order now and will ship early December. 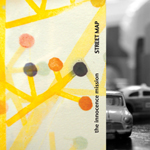 3 thoughts on ““Street Map” debuts in advance of new album”