More on the new album

First off, the vinyl version of We Walked In Song will have a bonus track.

Also, I found this little bit of information over at Midheaven.com:
“…Their new album, We Walked in Song is one of their strongest works, though there was great tragedy in the beginning stages of creating the album. “Sometime after the passing of her father, Karen Peris began to write some of the most heartfelt material I have heard from the band. I believe she turned to songwriting as a way of coping with this great loss and celebrating those she loves in her life,” says Badman’s Dylan Magierek.

With eleven new, memorable and genuinely moving songs, We Walked in Song is the kind of intimate recording where each note seems essential. From the socially conscious opening track, “Brotherhood of Man” to the longful closing lines of “My Sisters Return from Ireland,” Peris’s hauntingly beautiful voice communicates with immediacy. Her visual, engaging lyrics have a rare, emotional depth and a firm sense of place. Don Peris’s ringing, tremulous electric guitar and Paul Simon-inspired acoustic guitar weave their own touching melodies around Karen’s voice. The tracks are further lit by gentle lines of melodic piano, upright bass and baritone acoustic guitar.” 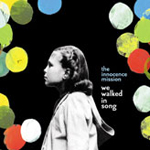